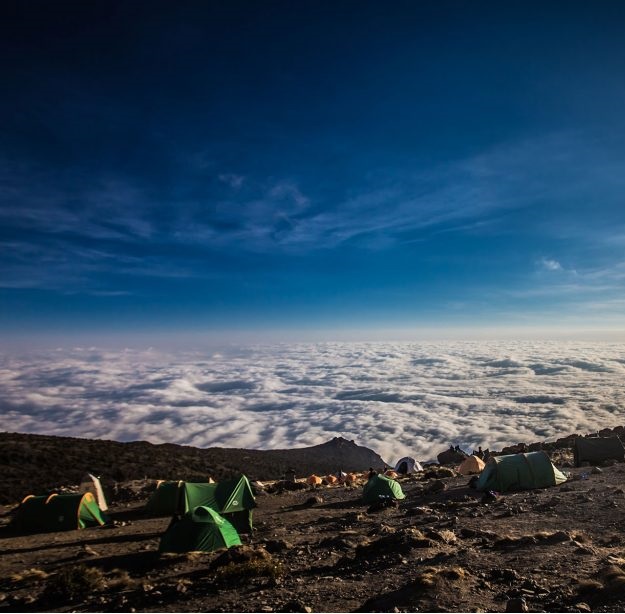 Marangu route is also known as the “Coca-Cola” route, the Marangu route is a classic trek on Mount Kilimanjaro. It is the oldest, most well established route. Many favor the Marangu route because it is considered to be the easiest path on the mountain, given its gradual slope. It is also the only route which offers sleeping huts in dormitory style accommodations.

The minimum days required for this route is five, although the probability of successfully reaching the top in that time period is quite low. Spending an extra acclimatization day on the mountain is highly recommended when climbing Klimanjaro using the Marangu route.

However, despite its immense popularity, we avoid leading climbs on the Marangu route. The route has the least scenic variety of all the routes because the ascent and descent are done on the same path and it is the most crowded route for that reason. Marangu is favored only during the rainy season, where the hut accommodations are preferred over wet ground, or for those who only have five days to climb Kilimanjaro (which we do not recommend anyhow). Otherwise, the Marangu route is a poor choice.

After breakfast and briefing, drive to the Kilimanjaro National Park Gate (about 1 hour), register and commence the climb. Walk through the rainforest to the Mandara encampment. A side trip to Maundi Crater is a good way to see the surroundings including Northern Tanzania and Kenya. In the rainforest, look for towering Eucalyptus trees, bird life, and Colobus monkeys.

You leave the glades of the rain-forest and follow an ascending path on the open moorlands to the Horombo encampment. Views of Mawenzi and the summit of Kibo are amazing. Look for giant lobelias and grounsels. You may begin to feel the affects of the altitude.

Ascending, we now pass the last watering point, walking onto the saddle of Kilimanjaro between the peaks of Kibo and Mawenzi. Vegetation begins with upper heathland but then disappears into “moonscape”. Dinner, rest, and prepare for summit climb.

Day 4:Hike Kibo Hut to Summit, and down to Horombo Hut

Very early in the morning (midnight to 2 am), commence the climb to the summit on steep and heavy scree or snow up to Gilman’s point located on the crater rim. Continuing, we now ascend to Uhuru Peak, which is the highest point in Africa. There are unbelievable views at every turn. Have your picture taken at the summit to show your friends and family. From here we descend, stopping for lunch and a rest at Kibo before continuing on to the Horombo encampment.

The beginning of this climb is done in the dark and requires headlamps or flashlights. It will be very cold until you start descending, so you will need all of your warm layers. This is by far the most difficult part of the trek with many switchbacks. Going slowly “pole pole” and an optimistic attitude will get you there!

After breakfast, a steady descent takes us down through moorland to the Mandara Hut. Continue descending through lush forest path to the National Park gate at Marangu. At lower elevations, it can be wet and muddy. Gaiters and trekking poles will help. Shorts and t-shirts will probably be plenty to wear (keep rain gear and warmer clothing handy).

A vehicle will be waiting for you at Marangu gate to drive you back to your hotel in Moshi (about 1 hour).