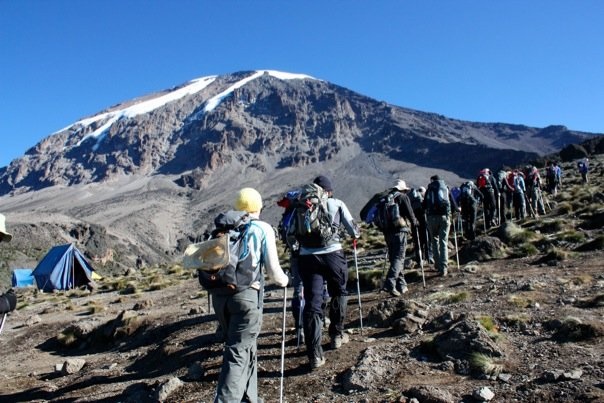 The Machame Route is one of the best options for climbing Kilimanjaro and reputed to have the highest success rate. This scenic route offers a longer period for acclimatization and takes different routes up and down the mountain so you don’t do any backtracking over the same terrain. It features a tented camping experience.

The trip begins as when we pick you up from the airport at Kilimanjaro  where we will take you to a hotel in Moshi for the night  spend and you will be introduced to your mountain guide who will ensure you have all the necessary gear for the climb and brief you about the trip. The next morning it’s about an hour drive to the park gate where you will begin the trek. The first day of trekking is about 5 hours through the beautiful rainforest at the base of Kilimanjaro to the Machame Camp. The trek continues on the second day,third ,fourth and fifth  through increasingly sparse trees and bushes into moorlands and finishes at Shira Camp,Baranco,Karanga and finally Uhuru peak. The trekking is quite helpful for acclimatization as you ascend to the Lava Tower before descending to the campsites .

Machame Route or the “whiskey route” is one of the most popular routes due to its picturesque views and varied landscapes.However, climbing through Machame Route is a bit difficult as compared to Marangu route. Even though the walk on the Machame route is steeper and longer, still the success rate is higher than the Marangu route.Machame Route is not technically difficult, but the climb is more exhausting as it has many ups and downs crossing a chain of valleys and ridges.  Usually, the minimum days to summit Kilimanjaro through this route is six, but seven days is recommended.

Your 7 days Machame route climbing start for driving you from Moshi to the Mount Kilimanjaro National Park Gate it takes about 45 minutes. After paper work the journey start passing through the village of Machame which is located on the lower slopes of the mountain.

We depart the park gate and walk through the rain forest on a winding trail up a ridge. At lower elevations the trail can be muddy and slippery. Gaiters and trekking poles are a good idea here. We continue a short distance until we reach the Machame Camp.

After breakfast we leave the glades of the rain forest and continue on an ascending path, crossing the valley along a steep rocky ridge. The route now turns west onto a river gorge until we arrive at the Shira campsite.

From the Shira Plateau we continue to the east up a ridge, passing the junction towards the peak of Kibo. As we continue, our direction changes to the South East towards the Lava Tower, called the “Shark’s Tooth” (elev 4650m/15,250ft). Shortly after the tower we come to the second junction which goes to the Arrow Glacier. We now continue down to the Barranco Camp. Although you end the day around the same elevation as when you began, this day is very important for acclimatization and will help your body prepare for summit day.

After breakfast, we leave Barranco and continue on a steep ridge up the Barranco Wall to the Karanga Valley and the junction which connects with the Mweka Trail.

We continue up to the Barafu Camp. You have completed the South Circuit, which OFFERS views of the summit from many different angles. Here we make camp, rest, enjoy dinner, and prepare for the summit day.

Day 6:Climb Barafu Camp to Summit, down to Mweka Camp

Very early in the morning (midnight to 2 am), we continue our way to the summit between the Rebmann and Ratzel glaciers. You head in a northwesterly direction and ascend through heavy scree towards Stella Point on the crater rim. This is the most mentally and physically challenging portion of the trek. At Stella Point you will stop for a short rest and will be REWARDED with the most magnificent sunrise you are ever likely to see. Faster hikers may view the sunrise from the summit.

From Stella Point, you may encounter snow all the way on your 1-hour ascent to the summit. Once at Uhuru Peak you have reached the highest point on Mount Kilimanjaro and the continent of Africa!

From the summit we begin our descent by continuing straight down to the Mweka Camp, stopping at Barafu for lunch. You may want gaiters and trekking poles for the loose gravel going down. We arrive at Mweka Camp and enjoy our last evening on the mountain.

Day 7: Climb Mweka Camp to Mweka Gate and then drive to Moshi

After breakfast we continue descending down to the Mweka Park Gate to receive your summit certificates. At lower elevations, it can be wet and muddy. Gaiters and trekking poles will help. Shorts and t-shirts will probably be plenty to wear (keep rain gear and warmer clothing handy).

Vehicle will be waiting for you at Mweka Gate to drive you back to your HOTEL IN Moshi (about 30 minutes). End of your 7 day Machame route climbing